Munnar……..it is a place I have visited a number of times. Last month, when yet another opportunity to visit Munnar beckoned me, it got me thinking if there were any new sights to visit in Munnar other than the usual Mattupetty, Top-station, Devikulam Lake, CSIH, etc.

On browsing through some books which described, with pictures, the lovely landscapes of Kerala…..on when and how to get there…….where to stay, etc., I happened to come across a four-line paragraph on Kolukkumalai. The description was short and there were no pictures of the place shown. The brevity in the description and the absence of photographs made me assume that it was an unimportant place devoid of any scenic beauty, but the events that followed, proved how wrong my assumptions were. 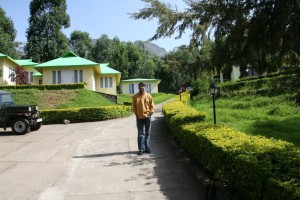 My usual place of stay on reaching Munnar is The Blumont Resort on the Chinnakanal route(Ph:-9447131710). The manager of the resort, Thambi, had arranged a jeep for the trip to Kolukkumalai on the previous night itself. Since the mountain path to Kolukkumalai was made for tractors to ferry the tender tea leaves from the plantations, only a jeep could take you up there. If an (mis) adventurous tourist decided to traverse the path in a car, it would surely end up midway with a broken axle and in all likelihood would have to be ferried down in one of the same old tractors that the path was made for.

Our driver, Ramesh, who was a resident of Suryanelli, arrived at the resort in the morning itself and our four-member team were all too eager to embark upon a journey to a hitherto unseen place. I sat in the not-so-popular rear seat of the jeep so that I could get an unhindered view of the lovely terrain and could take photographs comfortably.

We reached Suryanelli by traveling about 2.5 kms on the Chinnakanal route. Here Ramesh stopped the jeep to speak to someone and when their discourse was over a person came up to the rear of the jeep and placed about 8 packets of milk below the seat opposite mine. If we wanted to drink a cup of tea on reaching Kolukkumalai, there would be no milk available there; hence it was a usual practice to take the milk along, explained Ramesh in his Tamil- accented Malayalam.

“Sir, this is for all….. what if more tourists came along” replied a magnanimous Ramesh.

We traveled a further 2 Kms and reached the gates of Harrison Malayalam. 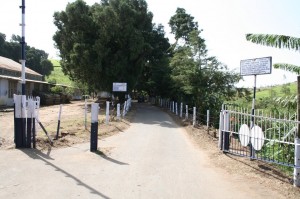 To pass through their plantation, one had to buy a Rs 50/- entry ticket. Ramesh got down and bought the ticket. The jeep continued its onward journey. The speedometer of the jeep hovered between 10 and 15 km/h. It took us nearly an hour to cover a distance of 15 kms. through the plantation; the treacherous paths being the main culprit. All gears except the first gear seemed redundant till we reached the top. At times it felt as though the whole rear portion of the jeep was being tossed about. My ambition of taking photographs sitting in the rear of the running jeep was soon jettisoned. Ramesh, however, was thoughtful enough to stop the jeep wherever a photo-opportunity came up. 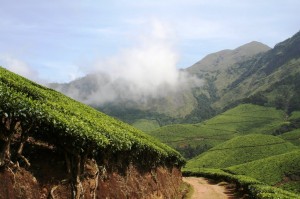 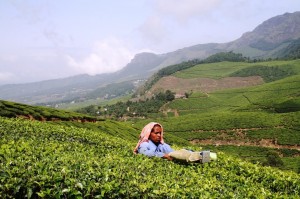 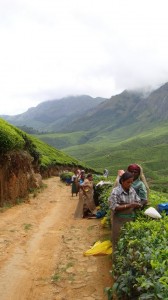 Right throughout our journey there was a running commentary from Ramesh with his thick Tamil-accent, which seemed more skillful than any professional tourist guide. Being a plantation worker’s son, Ramesh had remarkable knowledge about the various aspects of a plantation. 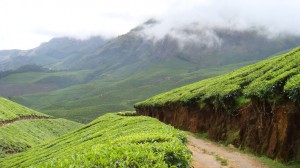 The tea gardens unfolded like green carpets on either side. Through what seemed like a crevice in the green carpet, our jeep traveled towards the top at snail’s pace over the narrow and very uneven path. 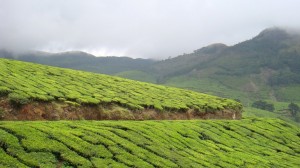 On traveling further forward, we came across a sign saying “Bend 1” and there were a total of “12 Bends”. The jeep was unable to negotiate even a single bend at one go. On each bend the jeep had to be reversed and then driven forward. Even though I had seen quite a few hair-pin bends in my time, the bends we were negotiating now were a new experience to me. By the time we had climbed past “Bend 9”, we had reached a border at the height of 7130 feet. It was the Kerala – Tamil Nadu border. 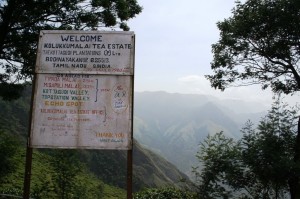 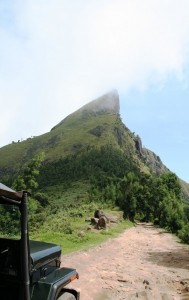 The valley down on the left side was all Kerala and the valley down on the left was Tamil Nadu. Across on the front, stood a mountain with its head majestically held high. This was the Theepada mountain. We stood there for some time whispering sweet nothings to the clouds that leisurely sailed just above, almost caressing our heads. Some clouds, like scattered flock, could be seen settled here and there over the mountain sides. It was a sight to behold…..a sight that you would never have enough of…..a sight that soothened not only your eyes, but your heart as well. 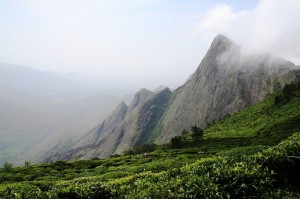 Another jeep came and parked right behind us. In It was a honeymoon couple. Now their jeep couldn’t move forward unless we did so too. But like us, they too seemed not too keen to move away from this lovely place. I guess people did not travel such heights and distances, away from their monotonously fast-paced lives and work to indulge in a race of another kind. 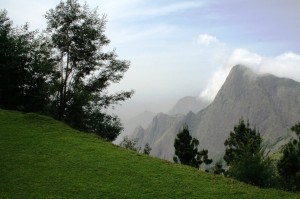 There were 3 more bends all heading down. From here on, the Kolukkumalai Tea Estate owned by the Kottagudi Plantations could be seen spread over 300 acres at a height of 6625 to 7980 feet. 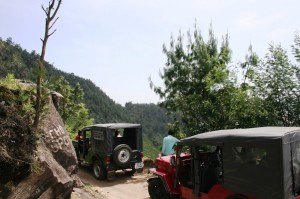 Ramesh stopped the jeep half-a-kilometer further down. It was an echo point. Everybody alighted and shouted their hearts out. The sounds echoed back not once or twice but three times. By then the honeymoon couple’s jeep had once again come right behind ours. 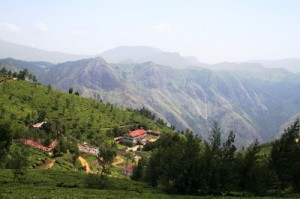 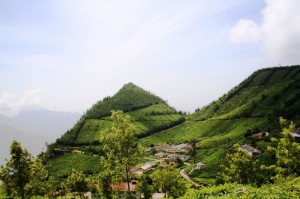 Looking ahead we could see some building amidst the tea gardens. The tall building seen was the tea factory and adjacent to it was the office building. The rest were staff quarters. The clouds seemed to roam fearlessly without any complaints amongst these buildings, having gotten used to the sights and sounds of the humans who had nestled even higher than their abode. 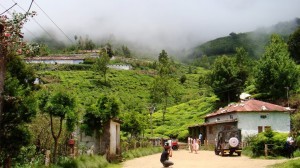 Within the next five minutes we reached the tea factory. After having given the milk packets from the jeep to the office building, Ramesh informed us that we could relax on the chairs provided. Since Ramesh was a frequent visitor here with tourists, he seemed to have the freedom to deal with everything. After playing the gracious host by giving us all a cup of tea, Mani, a factory employee took us inside the tea factory. The tea leaves were being processed here in the traditional way using the machines brought over from England by the British in 1930. It took about 45 minutes for Mani to take us around the factory, explaining to us the various processes involved and clarifying our doubts. Looking out of the view point behind the factory, we could see Top Station, the Kodaikanal hills, Palani Hills, Meeshapuli Hills, and Bhodinaickanoor.

Kolukkumalai can be reached by road only from the Kerala side. If we travel down 7000 ft to a distance of nine kilometers, we can reach Kurangini in Tamil Nadu. It is only from here we can travel by road to Bhodinaickanoor. There is no other way by road to Tamil Nadu. Before the road to Kerala was formed, the tea garden workers used to travel down the mountain on foot and sell the tea leaves, buy their daily provisions, and return back to the top on foot.

I had come to know that Kolukkumalai was the highest tea plantation on the Indian Subcontinent before we had started out to this place. But it was only after the factory visit and photo sessions when we went into the office buildings to buy some factory-fresh tea leaves did we come across an astonishing bit of information. Kolukkumalai was, in fact, the highest tea plantation in the whole world. This was printed on the tea leaf packets kept for sale. 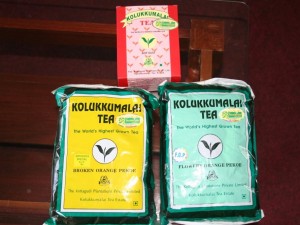 Most of the tea leaves processed here were bought by the tourists who visit this place, and except for some that is sold in a handful of resorts, we couldn’t get to see it for sale in any of the shops selling tea leaves in Munnar. Perhaps that is why, in spite of getting the Golden Leaf award in 2007, many in the outside world are still unaware of Kolukkumalai. If the Kerala Government takes up the initiative and puts Kolukkumalai on the tourism map, I am sure that the Government will be able to reap in the benefits.

Before we started our return journey, we were treated once again to a cup of piping-hot tea in the office building. Except for an annual Urea treatment, the tea plants are grown without the use of any other chemical fertilizers or pesticides. Unlike in other tea plantations, there is no need to water the tea plants grown here. The high humidity maintained by the constant contact with the clouds was the reason behind this. The waste that is formed after the processing of the tea leaves is used as the fertilizer.

After understanding these new bits of information, the second cup of tea seemed tastier than before. No….not seemed, the difference in taste was definitely palpable. The very thought of drinking tea made from a tea plantation situated on the roof of the world in itself was a pleasurable experience which gave the tea an awesome taste. We started the return journey after buying more tea leaves and tea dust than we had originally intended.

Driving the jeep down with the gear in neutral caused me a bit of anxiety, but refrained from questioning Ramesh who was an “old pro” in driving on these terrains. We became aware of a couple of jeeps coming up only when they reached very close to us, but Ramesh could instinctively sense it beforehand. Two jeeps could cross each other only at the bends. So when a jeep approached you, one of the jeeps had to wait at a bend. If this calculation misfired, it was inevitable that one of the jeeps had to reverse back to a bend in order to let the other jeep pass.

The fog descended on many an occasion on our return journey through the tea gardens with the clouds caressing us overhead. These were rare experiences which enhanced the beauty of this journey. By the time we returned back to Blumont Resort it was evening. We lit up a camp fire and spend another night there. 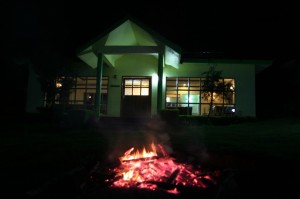 On the return trip to Ernakulam the next day, some small sign boards put up by the Kerala Forest and Wildlife Department caught my attention.
It said, “LEARN, ENJOY, AND RETURN”
We had learned enough and had enjoyed it even more, but it was impossible to return in the truest sense. After all, even though our corporeal bodies could return back in our vehicle, our minds still remained enthralled, some 8000 ft above in Kolukkumalai.