Work carried over from the previous day, was becoming a major concern. So far, the main ‘villain’ preventing us from taking care of the pending items before starting off on the next day’s journey, had been the check-in and check-out times of our lodgings. For most of them, the check-out time was 12 noon. This was proving to be a serious hurdle to our plan of sorting out all pending issues by afternoon, before starting the next day’s journey. We left Santhanam’s Villa at 11:00 AM, having packed up all our finished and unfinished tasks, along with our gear. Accompanying us all along, was the perpetually blowing breeze of Kutralam.

People visit Kutralam, known as ‘The Spa of South India’, to see the falls and splash around in it. Bathing in the falls is believed to be beneficial because the water flows through Pothigai hill, which is rich in medicinal herbs – before reaching Kutralam.
Only after arriving at Kutralam did I realise that there were multiple falls. Old Kutralam, New Kutralam, Aintharuvi or Five Falls, Champadevi Falls… the list goes on. We decided to visit Old Kutralam first.

Probably owing to the ‘off-season’, roads were deserted. There was little chance of losing our way – clear and precise signages were everywhere. Just where the road turns toward the falls, there is an entrance arch, and an entry fee is collected just beyond it. As we were paying the fee, a man approached our vehicle with palmyra fruits in a palm-leaf cone. We were yet to have breakfast, and spotting his makeshift shop closeby, we approached to see a veritable feast of fruits laid out on a table. Jackfruit, Mangoes, Tamarind… items guaranteed to make me lose my self-restraint! The man and his wife were cutting a jackfruit open and separating the fruitlets. I set aside the Palmyra and pounced on the jackfruit. The colour told me that it was Then-Varikka (a variety of jackfruit know for its intense sweetness – Then in Malayalam means Honey). And Then-Varikka it was!

I was so completely enamoured by the fruit, that I nearly lost all interest in seeing the falls. Everyday, the couple walk five kilometres each way, from their home in Thenkasi to this wayside stall. They allowed me to take a look in the adjacent shack where they had stored multiple varieties of mangoes, all wrapped up in hay to ripen. When there is a stock of fruits in the shack -either kept for ripening or unsold stock- the guy stays there overnight. How I wished I could stay in the shack instead of him – even for a single night! 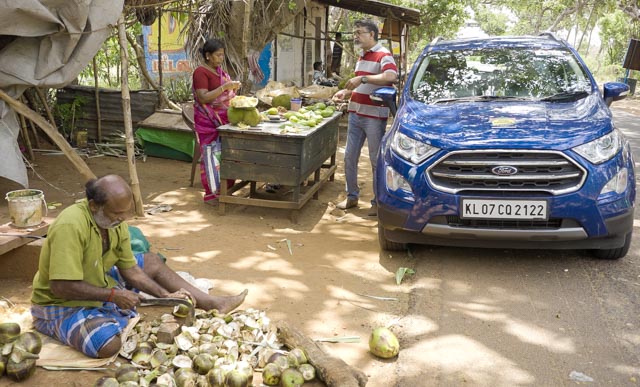 They had plenty of jackfruit in stock – all from the same tree whose fruit I had just tasted. I didn’t have the heart to leave without taking at least one of them. Was there space in our vehicle? Well no! But I was fully capable of making space for a jackfruit, even in the most jam-packed vehicle. In went a jackfruit and some Karineelan mangoes. The vendor, happy to have found such a good customer, let me have a palm-leaf cone full of mango slices, for free. How do I describe the sheer joy of wandering around away from home, feasting on jackfruit and mangoes?

We enquired about the difference between Old Kutralam and New Kutralam, and came to know that Old Kutralam was taller. At the falls we found a few visitors and a couple of auto rickshaws. The crow seemed directly proportional to the amount of water in the falls! Huge natural walls of rock, tower along both sides of the tour path. The falls was approximately 60 metres in height. Water cascaded from the rock wall on the left.

The surroundings were strewn with garbage – including plastic.
At the bottom of the cascade, about a dozen people including men, women and children, were drenching themselves. Capturing the extremely dwindled falls on camera avoiding the drenched tourists, was a herculean task. Finally, I compromised by taking a single shot, focusing towards the top of the falls. We left the place as soon as we could.

The next destination was across town – Aintharuvi (Five Falls). The entry-ticket seller was apologetic “There is very little water, sir!”. I half jokingly asked him to reduce the entry fee – and much to my surprise, he let us pay half price!

Like all tourist destinations, there were shops everywhere in Aintharuvi. We stopped for a drink of water before going towards the falls. Suddenly a bus load of school kids descended on the place, invigorating the surroundings. When we reached the falls, we found the kids noisily splashing about in the water. There was very little water here as well. The falls cascade from a lesser height than at Old Kutralam. Macaque monkeys swarmed the rocks and the whole area was covered in garbage. Once again, we left post-haste.

Supposedly, there were five waterfalls at Aintharuvi. However, I could not see more than one – probably due to water levels being low. What we did find in abundance however, were mangoes and mango sellers. There are a lot of mango groves below these mountains, and pesticide free mangoes are available at affordable prices. We stopped our vehicle at one of these wayside shops and surveyed the scene. Mangoes, Jackfruit, large Water Rose Apples, Tree-Tomatoes, Egg Fruit and various other fruit were on sale – all cultivated in the valley. Dragon Fruits were the only outsiders. Even Banganapalli mangoes commonly known to be from Andhra Pradesh are being grown here. This variety is expected to start fruiting in a couple of years. I sampled a non home-grown Banganapalli mango before continuing the journey.

There is an information board at Five Falls which lists all the waterfalls of interest in Kutralam – Tiger Falls, Champadevi Falls, Chittaruvi, Main Falls, Peraruvi, Thenaruvi etc. But since most of them wouldn’t be ‘falling’ due to water being scarce, we decided to give the rest of them a miss. We hope to be able to introduce them all to you during GIE, if we plan our visit to coincide with a monsoon.  We headed towards our next destination – Punalur.

We retraced our route via Thenmala, up to Enaathu. The original plan was to travel all the way to Punalur via Edaman. But eventually we decided to stay in Pathanamthitta instead. At Pathanamthitta, I spotted one of the checkpoints where I had my brevet card stamped, on an Ernakulam to Pathanamthitta BRM (Brevet des Randonneurs Mondiaux)  event a few months ago. I felt a strange sense of loss – quite some time had elapsed since my last long-distance bike ride. The foldable bike sponsored by The Bike Store that we were carrying to ensure that both the travellers occasionally got some physical exercise, had been waiting for me in our vehicle’s boot for the past week.

So far, our intended night-halt locations have been continuously adjusted according to our travel plans. We need to get used to searching for a lodging at the end of the day – rather than booking ahead. I wonder how easy that would be once the Great Indian Expedition leaves Kerala.