It’s been more than a while since ‘House Boat tourism’ has become a huge hit in Kerala. Though a houseboat trip has been on the agenda for a long time, owing to multiple reasons it never happened. Finally, in July 2002 we arranged a pleasure trip on a houseboat through a local travel agent based in Alapuzha. 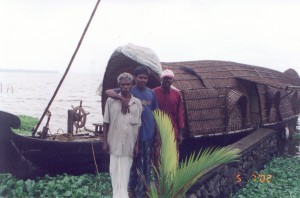 We started from home in the afternoon. We were to stay in a house by the banks of the Vembanad lake in Muhamma. A house … you may suspect, the house belonged to one of my friends or relatives. But no, this house belonged to an Austrian ‘Sahib’(sahib is a colloquial reference to a fair skinned male foreigner; in kerala sahib is pronounced to sound like ‘sayip’) !

What?? An Austrian – having a house in Muhamma? Don’t be astonished. Yes, it is true.

The ‘sahib’ is close to 55 years of age. But he has one problem. His body is paralyzed downwards completely except for his head. Though this is the case, the sahib does most of everything that a normal person of his age would do. The one major dependency he has is that he needs help to be positioned and navigated on a wheel chair. The house and property is designed in such a way that the wheelchair can be comfortably operated both inside and outside. There are no steps anywhere, even at the doors. On wheeling down the verandah slopes to the dancing backwaters nearby, you can see a structure consisting of an iron post to which a pulley and rope is attached. Using this arrangement, the sahib along with his wheelchair immerses in the water up to the level of his neck and ‘swims’!

Forget all this; there is much more remarkable information about the sahib. He continues to be employed even in this condition. And that too, it is not a run of the mill kind of commoner job. He is a responsible sitting judge in Austria!! At first I found it difficult to believe this. How is it that with this immovable body and its immense limitations, he is able to manage the affairs of the court and pass judgments?

He prepares all his judgments using a computer. Someone has to switch on the computer for him. After that a head band is tied to his forehead resembling that worn by the cine-actor, Balachandra Menon. When a key board appears on the screen, the sahib starts to move his head. When a beam of light emanating from the head band hits the alphabets on the keyboard, a pull down menu comprising of words start to appear on the screen in the combination of the selected alphabets. Moving his head, the sahib chooses the words he requires. Very easy, isn’t it?

Oops, apologies….I haven’t still told you the name of the sahib, right? His name is ‘Wolf Gang’. Isn’t it a rather impressive name?

It was a young man from the neighborhood who was assisting Wolf Gang till very recently. Sometime back, Sahib married a local Malayali lady aged around 40 years and from then on, the young man’s work has reduced to only housekeeping and security.

It was a charming little house with a tiled roof; having two bedrooms, verandah and other facilities. The interior décor has been done using only Kerala style handicrafts. Huge ‘nannangadi’s, utensils made of ‘churakka’ used by toddy tappers etc are some of the items which we can see displayed inside the rooms. On the green lawns extending right till the lake, we can see a multi-layered lamp made of black granite stone right in the middle of the property. On certain special days, all the layers are filled with oil and the lamp is lit!

During the winters in Europe, Wolf Gang heads to Kerala. His paralyzed body is unable to withstand the harsh winters. During the period he is not here in Kerala and when the tourism season sets in, the 2 bedrooms are rented out as home-stay facility to visitors through some tour operators. So that explains how I was able to arrange our stay there as well.

Whatever it be, there is no better example I have seen than Wolf Gang to prove that nothing is impossible if you set your mind on it.

The young assistant of Sahib prepared dinner for us. He had collected the order from us previously during the afternoon itself.

The next day in the morning, a houseboat came and parked in the jetty right in front of the house. We spend the whole day on the houseboat gliding on the waters, sightseeing on the Vembanad lake and the canals of Alapuzha. Considering that it may not be of any particular interest, we decided to skip a stop at Pathiramanal. It was definitely more worthwhile and interesting to be able to directly see and experience the beautiful sights of life passing us by on either sides of the canals and the finishing point of the famous Kerala boat race.

There were 3 crew members aboard the boat. In the afternoon, the boatmen stopped at a nearby island to buy fresh fish and they fried the fish and served it with rice for us in the afternoon. Secretly they also managed to procure some beer!! The usual practice is to catch fish from the boat itself using a fishing rod. However, that day no fish had bitten the bait and hence the purchase! 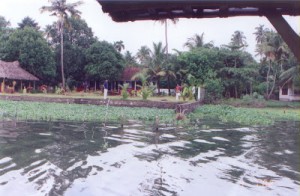 Sometime in between, the waves became rough owing to two motorized ferry boats passing very close to us, almost capsizing our boat. I have to admit we did panic a little.

At night, we slept on the boat itself after anchoring right in the middle of the lake. We slept peacefully listening to the humming music of the frenzied mosquitoes circling outside the mosquito net spread over our bed. In the middle of the night, our one and a half year old daughter woke up with a jolt from her sleep and started to cry seeing the unfamiliar surroundings. After some time, she went back to sleep feeling tired.

The next morning, we drew up the anchor and set off on our return journey to Wolf Gangs residence. By lunch time we headed back to Ernakulam.

We departed experiencing a rare fulfillment of having seen and known so much more than merely having had a delightful houseboat journey.
———————————————————–
Translated from my Malayalam blog ‘ Chila Yaathrakal ‘ by geetham. To read the Malayalam version, click here.

The Sahib and the house boat”