The travelogue for Day 1 was done at midnight that day. Even at that point, there were pending issues to deal with, so we decided to extend our stay in room 103 at KTDC (Kerala Tourism Development Corporation) Tamarind Motel until we resolved at least some of them. By early afternoon, the video travelogue was almost complete. The hotel staff informed us that we needed to check out at noon, so we packed our gear and moved out.

The motel stood at an elevation, near the catchment area of The Neyyar Dam which was visible from the restaurant. In spite of having spent a night and almost a day in such close proximity to the dam, it would have been a terrible oversight if we hadn’t captured this view. Hence we decided that the plan for Day 2 would be visiting Neyyar Dam, and capturing it for you. We would later proceed to Nedumangad, find a place to stay, and publish the travelogue for days 1 and 2.

As the name suggests, Neyyar Dam is a gravity dam built across the Neyyar river. The foundation stone for the dam was laid by Mr G. Chandrashekhara Pillai, erstwhile Minister of Public Works in Thirukochi (one of the three princely states that were later merged to form Kerala State) on December 15, 1951. The 56-metres tall and 294-metres long dam was commissioned by Mr Bishnuram Medhi – then Governor of Madras, on February 9, 1959. The dam is mainly used for irrigation, and water is let out through a huge pipe to canals 24-hours a day.

There are a lot of sights to see here. The most captivating one is the view of the catchment area from the watchtower. The Forest Department and KTDC conduct boat cruises here – which are unfortunately closed on Mondays. The boat cruise takes you to a Crocodile park and Lion Safari, and there are strict instructions to not immerse your hand in the water – for fear of crocodiles.

The dam also houses a garden, Lakhs of rupees seems to have been spent on paving cobblestones and the like. However, sadly after such construction projects, maintenance activities seem to be totally neglected. Almost all such public works decay into such decrepitude right after construction.

Another attraction of Neyyar Dam was the Aquarium. While most aquaria I had previously visited have been devoid of any interesting marine life, that was not the case here. It housed various types of freshwater and saltwater fish. For the first time in my life, I observed how shrimps move in water. Quite a few varieties of shark – Tiger shark, Rainbow shark etc – were housed in huge tanks. One type of fish was very interestingly named ‘Miss Kerala’. Details including the scientific name, common name, lifespan etc of each aquatic animal were clearly exhibited.

In my experience, photography in and around dams was always prohibited. Neyyar was an exception – the only issue was that passes had to be procured at each stage. Separate fees had to be paid for entry, camera and parking at every area of interest including the main entrance, the watchtower and aquarium. These were all charged separately. I believe that, it would definitely make sense to consolidate all of these passes into a single fee.

Our plan for the night was to halt at Nedumangad since it was hardly 30 kilometres away. But the accommodation available was above our planned budget. Finally, Johar found a room for ₹829 at Aquarock Hotel, Mannanthala, on the OYO App. However, when we landed up at the hotel, they informed us that they had parted ways with OYO, and could not let us have a room. Calls to OYO’s helpline numbers and their customer executive were to no avail. OYO had let us down, and we were left seething at having parted with our money under false promises. We scouted around a bit, but could not find another room in the area. Finally, we realized that Hotel J.K. International, Trivandrum – from where we had started the day’s journey, was merely 7 kilometres away, so we headed towards it. By the time we finished dinner and settled down to prepare the travelogue, it was 10:00 PM. We had travelled a total of only 46 kilometres on day 2. 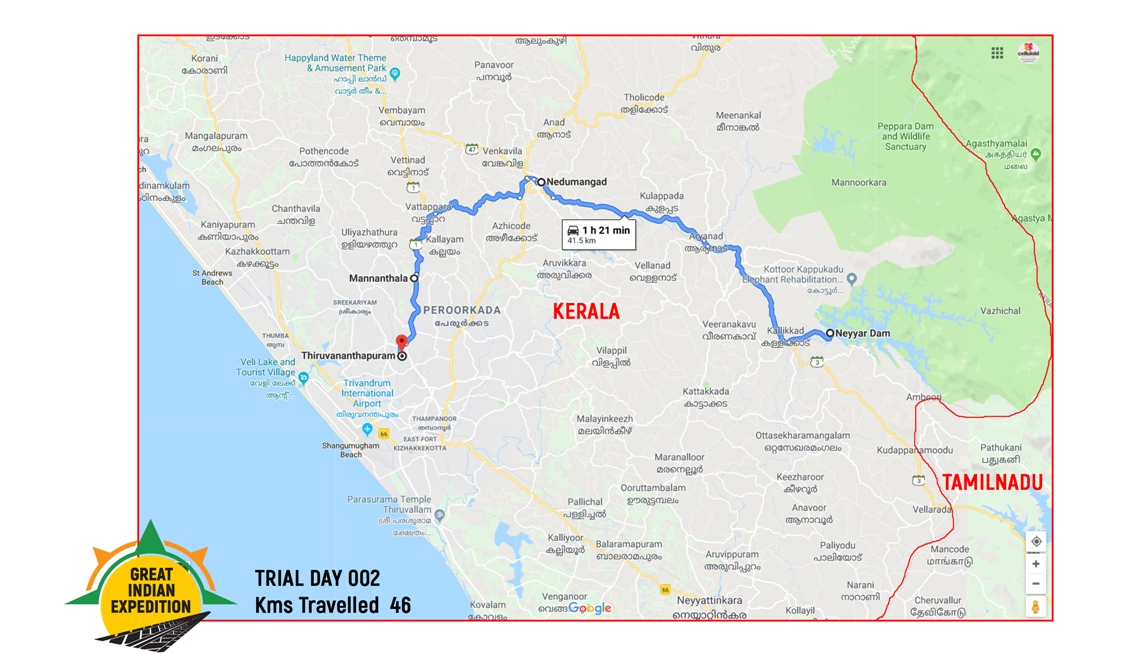 While we were trying hard to adhere to our “Halt-Wherever-@-3:00PM” rule, impediments like the one created by OYO kept cropping up to throw us off schedule. But hurdles like these are a vital part of the journey. The Great Indian Expedition was never meant to be a journey through flower-strewn pathways.