Thirunelli, known as Southern Kasi, is 30 km from Mananthawadi in Wayanad district, Kerala. Its main attraction is the famous temple of Lord Vishnu. I am a person who likes to have my temple and prayers in my own mind. Nevertheless, if time permits, I visit the Thirunelli temple during all my trips to Mananthawadi. The natural beauty of the locality is what draws me to this place. Besides, I enjoy driving through the forest roads shaded by huge trees and bamboo clusters. Mighty elephants take charge of these roads in the night.

It’s not difficult to find your way to Thirunelli. A little ahead of Kattikulam is the road to Thettu. Take a left from there, and the winding road takes you to Thirunelli. Very close to the parking lot is a big building, which is the Panchathirtham guest house. 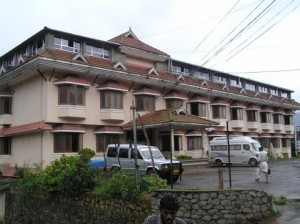 On my first trip to Thirunelli, this guest house was not there. It was opened in 2002 to facilitate pilgrims from far-off places. The guesthouse is like a landmark in the sense that one can get off the bus on seeing this building. There are no other big concrete buildings in the 30-km journey from Mananthawadi to Thirunelli, and, hence, it’s hard to miss it. 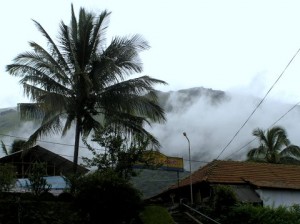 From the frontage of Panchathirtham, I could see the hills and a part of the temple. Alongside, a bunch of clouds wander as if they lost the way. Or did they come to visit the temple, too? 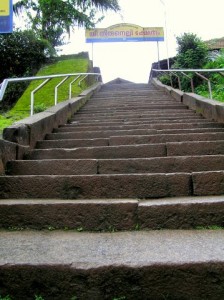 A flight of rock-cut steps leads to the temple. Remove your footwear and climb the steps to reach the rear of the temple. 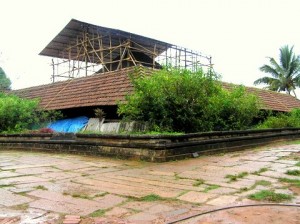 The space around the temple is paved with neatly cut, long sheets of stone. Walk on these tiles and reach the front of the temple. Resplendent with ancient temple architecture, this beautiful shrine magnifies the splendour of the hills. 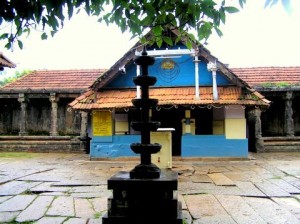 Legends galore
Legend has it that the idol was consecrated by Lord Brahma. Lord Vishnu in his four-armed form is the deity in Thirunelli.

Vadakkan Aithyahamala (The legends from North) refers about Thirunelli as follows:

Lord Brahma had a long-standing wish to conduct a ‘yaga’ (a holy sacrifice) on the earth.
His search for a holy and outstandingly beautiful place suitable for the yaga brought him to Brahmagiri. For a while, the Lord rested at this place brimming with extraordinary purity and heavenly beauty. He noticed a small hill and a lush Indian gooseberry tree on top of it. On reaching there, he was surprised to find Lord Mahavishnu in his magnificent form in the place of the gooseberry tree. However, Lord Vishnu vanished all of a sudden. This abrupt disappearance disappointed Lord Brahma. At the same holy spot where he saw Lord Vishnu, he consecrated Lord Vishnu’s idol with his own hands. This unusual incident brought surprise to all the three worlds in the universe. Praising this event, musicians from heaven sang, dancers performed, and the gods showered flowers.

Thirunelli is flanked by four hills, namely Brahmagiri, Udayagiri, Narinirangimala, and Karimala. The place is believed to have visited by Parasurama, Srirama, and Srikrishna – three other incarnations of Lord Vishnu.

Whatever the legends are, I feel bad when I see the board ‘Entry restricted for non-Hindus’ in Thirunelli also, like many other temples including Guruvayur. While the Temple Entry Proclamation was for lower caste Hindus, a similar proclamation is yet to come for the entire humankind.

The local hearsay mentions that the Thirunelli temple was built by a Coorg king and that before the construction was completed, Thirunelli, which was part of Coorg, became a part of Wayanad. This veracity of this is not yet confirmed. The beautiful, but incomplete-looking stone pillars around the temple are believed to be destroyed during Tipu Sultan’s warfare, though there are arguments against this as well. The chances of these pillars getting destroyed during war can’t be dismissed because history states that there had been war between Pazhazi Raja and Mysore army. 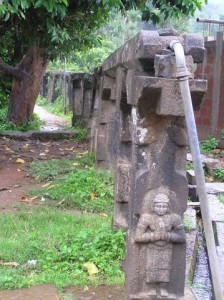 On the rocks
Water required for the offerings at the temple comes from the forest. The stone pillars that support the stone channels of water form an interesting visual.

A long time ago, the Lord of Kolathunadu along with his wife came to visit Thirunelli temple. As it had rained the previous day, the courtyard was full of slush, which stained the Lady’s feet. When she requested water to wash her feet, the servants gave very little water. The Lady wondered if there was no water in the temple’s well. The servants replied that the temple had no well, and since the nearby streams were being used by people for taking bath, the water from the streams was not suitable for the temple’s consumption. Hence, water had to be brought from a distant stream at Brahmagiri.

The lady, an ardent devotee of Lord Vishnu, got the above-mentioned structure constructed for easy availability of adequate water for the temple. The stone pillars and channels were built by expert stone masons, under the supervision of her brother and a specialist in Vastu architecture Vayikkara Valya Nambyathiri. 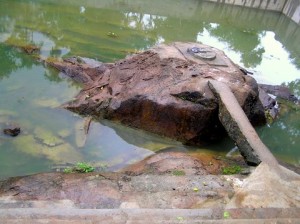 Wash away the sins
The steps on the north-west side of the temple leads to a sacred pool called Panchathirthakulam. Lord Srirama’s footprints are believed to have been imprinted here. The footprints shown below might be representing this belief. 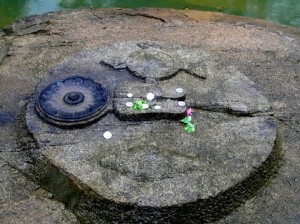 The legend is that Lord Rama, on his way to Coorg from Lanka after winning the war, performed special rituals for his deceased father Dasaratha at Thirunelli. It’s believed that since then devotees started performing rituals for their ancestors, at Thirunelli. 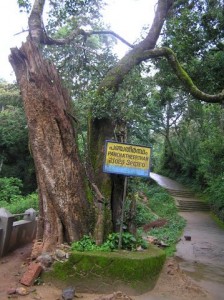 The pathway ahead of Panchathirthakulam takes you to the Papanashini river. Papanashini translates to ‘the destroyer of sin’. People from far-off places visit Papanashini to perform yearly rituals for their forefathers and immerse the burial ash. They make this long journey in the belief that a dip in this river will relieve them of their sins. Though the river overflows in monsoon, I have never seen enough water to take a dip during summer.

According to another legend, Garuda passed Thirunelli, when he was taking the pot of nectar (Amruthakumbham) to free his mother from a curse. He circled over Thirunelli thrice to pay respect to his master Lord Vishnu, whose idol consecration was taking place at that time. A drop of elixir fell from the pot to Papanashini and thus it got the divine power to purify sins.

Yet another legend is about Parasurama, who could not get absolved of the sin of killing his mother Renuka as demanded by his father Jamadagni, even after washing his blood-stained hands in various holy waters. In the end, he came to Thirunelli, and the blood stains disappeared completely after a wash in Papanashini. Papanashini got its name from this incident, and its powers became famous.

Our ex-prime minister Rajiv Gandhi’s ashes also were scattered in Papanashini. Thirunelli became famous in North India after this, and the number of tourists from North India has increased over the years.

I like to visit Thirunelli on a less crowded day, see the places, pray at the temple, and wash my hands and feet in Papanashini.

Beyond Thirunelli
If you are absolved of your sins, you can carry on your journey to other beautiful places in Wayanad. ‘Pakshipathalam’ is not very far from here. But, it’s not possible to go there by a vehicle. You need to go walking through the forest. In other words, you need to ‘trek’. Pakshipathalam is a perfect place for birders. The trek is extremely difficult during monsoons. Leeches are the main hurdle. I intend to visit Pakshipathalam after the rains. Anyone who likes to join me is welcome.
————————————————————————-