Wayanad- I may have to accept that I never felt the similar liking to any other district in Kerala, which I had felt for it. My every trip to Wayand is exciting, usually with visit to new places, fresh views or even a new piece of information from the places I had already visited. I ever used to carry any such sort of novel experience from Wayanad, when returns to Ernakulam. As there are so many places still left to be seen in Wayanad, I am sure, I have to climb up Thamarassery churam (mountain pass) many times.

I would describe my last trip to Wayanad, as something remarkable, probably would even compare it as something significant as, Columbus discovered America!

During the trips through Wayand, I had often noticed the road signs to Jain temples. However, then I used to be in the middle of a long journey to Bangalore or Ernakulam and due to the same reason, never had an opportunity to visit them. They had always kindled the curiosity,like how Jain temples could be here. I used to reassure myself that I would visit them once, when time in hand.

In this visit to Wayanad, I may miss the natural scenary due to heavy rain, atleast I could use up the time with temple visit, couldn’t I? Discussed the wish with my friend from Manathavady, Hari,who always used to accompany me in the Wayanad trips. Before I even finish saying it, Hari agreed to it. Ramesh Babu, Hari’s friend (now mine too) is a Jain. The answer to my doubt, if there are any Jains still living in Wayanad or atleast in Kerala, Ramesh Babu explained with statistics, which was a revelation for me.

Over 1400 Jains are living in Wayanad itself. The famous people like Virendrakumar M.P, is just a few of them. I was hearing all those facts open-mouthed. Am I the ‘frog in the well’? It is a realization that I don’t know much about Kerala state, despite that I had been living here, what a shame.

A strong feel developed that it will not be appropriate to postpone the trip to Jain Temples. At least effort should be made to understand about Jainism and Jain temples in Wayanad, should visit a few of them. Hari promised to make all the arrangements for it.
The Jain temple tour has started from the temple next to Vimal Jyothi working women’s hostel in Sultan Bathery, as I had to go to Bathery from Ernakulam. 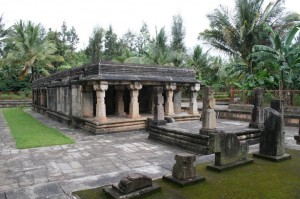 It is believed that the Jain temple was built in 13th century and now protected by ‘Archaeological survey of India’. It is said that, Sultan Bathery had 12 Jain streets in Kidanganad, which could be still evidenced in the village documents! The streets were called ‘Hannardubidi Basadi’. It is painful to realize that in Sultan Bathery, which was home for many Jains in the past, there is no more any Jain family left.

The Mysore invasion during the end of 18th century, fight between British and Pazhassi raja, the growth of shaivaism and vaishnavism etc were all said to be the reasons for the decline of Jain population, which resulted in the lose of protectors for the Jain temples. Later on, many Jain temples were transformed. Jain temple in Ernakulam district, devi temple at Thirucharanamalai in the place called Chitharal, Kanyakumari district etc are a few examples for the transformed Jain temples.

Even if the temple is in the protection of ‘Archaeological Survey of India’, the temple which is 800 years old could not be considered as properly taken care of. The measures taken would be just sufficient to make sure the building is not left to fell apart, and a guard was appointed. 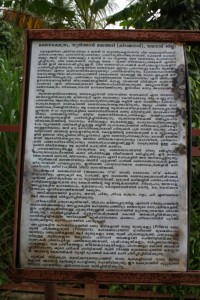 The attempt to get more information than written in the notice board, from the guard, Soman Nair, had turned out to be a boomerang to me. He was in the frustration of a transfer order to Mattancherry Palace. When he came to know that I am an Ernakulam native, he had more questions to ask me, than I could probably ask him. A shower of questions like what is the distance from Mattancherry to Ernakulam station?, Does the buses are frequently available? How long it would take in bus? Somehow, I managed to convince Soman Nair that Ernakulam is a ‘smart city’. Entered inside the temple and enjoyed the sculptures in Vijayanagara style. Walking through the stone paved circumambulatory passage once or twice, took several photos.

In 18th Century, when Tippu Sultan invaded Malabar, this temple named ‘Kidanganad Basadi’ was used to store the armament and the town got the name Sultan’s Battery, which later transformed to Sulthan Bathery. 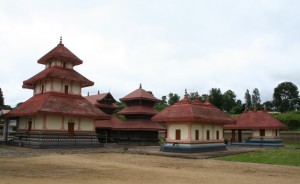 While the journey from Bathery to Manathavady, I just tuned away to Pulppally. Had heard there was a temple for Seetha-Lava-Kusha, felt to visit it too. Went there, just roamed around the temple premises, bowed infront of the closed door of deity. It was already 4 o clock when I had returned to Manathavady road. As it was raining heavily and was late than anticipated to reach Manathavady, visiting the rest of Jain temples was postponed to next day.

Next day I was fondly invited to the house of Ramesh Babu, at Puthiyadam, for lunch. I enjoyed the gourmet vegetarian lunch with many dishes which I never had tasted before. The taste of the Mysore style lunch still lingers to tongue, which had a variety of dishes such as pappadams,made from ripe and unripe jack fruit, one or two different pickles,two types of kondattams ( dried vegetable crisp).Ramesh Babus’s mother and wife gave me a parcel of some of the kondattams and jack fruit pappadams when I left, as they had ready my mind.

The important Jain temples in Wayanad are
1. Hodangadi Basadi (Manathavadi)
2. Puthiyadam Adeeshwara Swamy temple (Manathavady)
3. Sri Parshwanatha Swamy temple (Anchukunnu)
4. Parshwanatha temple(Palukunnu)
5. Sri Chandranatha Basadi (Puthangadi)
6. Varadur Sri Anathaswamy te,ple (Panamaram Meenangadi Road)
7. Hanarudibidi Basadi (Sulthan Bathery)
8. Santhu natha Basadi(Venniyodu)
9. Puthur Vayalile Uma-Maheshwara rock temple (It is now a hindu temple)
10. Sri Ananthanatha Swamy Basadi (Kalpatta)
11. Chandranathagiri (Kalpatta-Myladipara)
12. Kuthirakkodu temple (Thirunelli)
13. Echirakkolli temple-Bavali (it is now a Vishnu temple)
14. Swamykallu-Jessy Estate (it is now a Vishnu temple)
15. Edakkal Cave temple
Most of these temples are now Hindu temples. Many do not have any worship or even care. The common features in the temples such as Hoysala (Hoysala kings were Jains) script engravings, the age of temples, the structure of the idols, peculiarities in the hood of the snake idols, style of sculptures, are characteristic evidences to support the argument that all of them are Jain temples.

In 12th century, while the reign of predominant Hoysala kings in Karnataka, Wayanad was a part of it. Many historians such as Sri O.K Johny had observed in their studies that many of the Jain temples in the Hoysala rule were transformed to Vishnu temple after Bitideva, a Hoysala king had converted to Vaishnavism .

When we three came out after lunch, rain was drizzling. As it would be a vain attempt to wait for rain to stop, we ignored rain and started the journey as planned. The first destiny was Sri Chandranatha Basadi temple at Puthangady. It was at a distance of 10km from Puthiyadam. 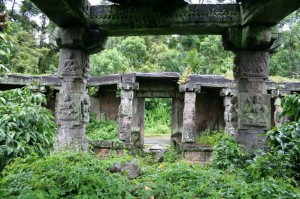 Hari stopped the vehicle when it was about to reach Puthangadi, infront of an abandoned temple, inside coffee plantation. Clearing the bushes and climbers, we walked inside. 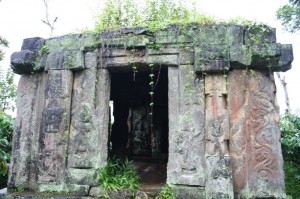 Beautifully engraved walls and pillars of the temple were almost near to devastation. Through the fissures in the rock roof, water was dripping in. Inside it was deep darkness and silence. The temple is not in the above list. But without doubt, could say that is a Jain temple. This would be Puthangadi Janardana temple, which was mentioned in some texts.

Lighting match stick, Ramesh Babu went inside, followed by Hari and myself, to observe the sculptures in the wall and roofs and the idols inside. The only visible things were cobweb and the temple was almost at the edge of falling apart. However it seems that renovation of the temple would not be very strenuous. 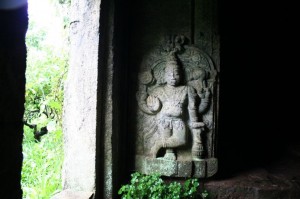 In the light which comes through the cracks in the roof, we saw some gods and goddess, who were peacefully hidden inside. After taking some pictures, we came out. While roaming around the temple we could find many more gods inside the bushes. 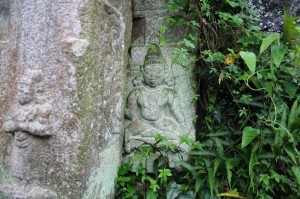 Felt an unexplainable anger to our rulers who left these temples which are the evidences of the heritage and beliefs to the face of destruction, instead of renovating and properly conserving them. Why God, none of them, Devasom board or Tourism board or Archeology department, does not feel to revive you? How you could tolerate such avoidance in your own country? 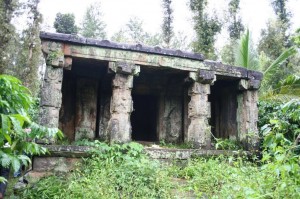 There is one more similar temple in Puthangadi. The signboard by Kerala tourism board, stating Jain temple, stands besides the road as a guide. The temple is a bit far from the road, inside a coffee plantation. When went near, it was evident that this temple also have the same odd fate of denial. Somebody had eaten a jackfruit there, leaving the waste just infront of the sanctum. 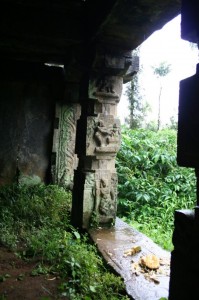 It was heartbreaking to see the bitter state of these temples. Even if rituals or recitals are not performed at least these ones have to be protected as cultural heritages? Ignoring all these, where we are heading to, in the race of the surviving struggles of life? One more add on question to the million unanswered questions!

Rain has become stronger. We haven’t reached Sri Chandranatha Basadi temple yet. Time would be enough only for going there. Probably darkness would spread by the time we finishes it. Hari turned the car.
(To be continued)
————————————————————–
I would not say it is a study about Jain temples. I have tried just to assimilate and include some information along with the sights I had seen. I never intended to hurt any one’s beliefs with this post.
Acknowledgment:-
Amritavarshini (Platinum Jubilee Smaranika 2008)- Ananthanadha temple Kalpatte, Sri O.K.Johny- historian,manager book development, Mathrbhoomi printing and publishing company, Sri V.V. Jinendraprasad, Sri.Rameshbabu, Sri.Hari, Kannur medicals, Mananthavadi.
—————————————————————
Translated from my Malayalam travel blog ‘Chila Yaathrakal‘ by Miss Anu.