A journey to eat Idlies !!! That too… on getting up at 4 in the morning for it. Amusing, isn’t it? 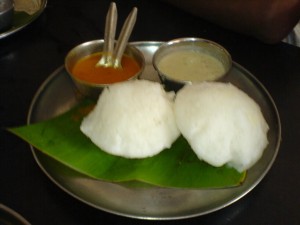 This trip was inspired by an article published in the Sunday supplement of a leading local newspaper.The feature was about a small village called Ramassery in Palaghat district of Kerala, famed for a unique type of Idli named after it. The article described how the idlies were prepared using a special type of oven, custom made earthen vessels and natural firewood. That was more than enough to tempt me. Thanks to the write-up, despite not being so much of an Idli freak, my mouth watered. I pledged to gorge on it someday. But I was never able to manage enough time to make an exclusive trip only for this purpose.

A few years went by. In 2004, my better half got a job transfer to Bangalore. We stayed there for over two years. Being an oil field employee, those days I had a schedule which allowed me one month vacation after every 2 months of work. Hence it was a routine then to make a trip to Ernakulam along with my wife and six year old daughter during my vacations. Those trips were usually by car. I really enjoyed those long drives which lasted over 10 hours. It was on one of those Bangalore- Ernakulam journeys, that I saw a sign board in a passing shot on the Palaghat highway which rang some bells inside my head.

On the left side, there was a small road going inside approximately 5 km before the road turning to Pollachi. It must have been past 2’o clock in the afternoon. We were always in a hurry to reach home once we passed the Walayar check post. Besides, it wasn’t the best time of the day to eat idlis. So I made a plan then itself. During the return journey, my breakfast will be the Ramassery Idli.

On our return journey from Ernakulam, we usually take a breakfast halt at the Indian Coffee House located on the Trissur-Palghat stretch. This time, we started our journey at 4:30 in the wee hours of the morning. No harm in starting a little early considering that we were heading to an unfamiliar place!

Before eight we reached the major turning to Ramassery. From there, we followed a scenic village road. After proceeding about 2 kms, we started to have doubts if we had lost our way?

To make sure we were on the right track, we stopped and asked a ‘mundu’ clad villager passing by,

“Is this the way to Ramassery?”

“Is it to eat the Idlies??? Just go straight ahead and take a turn to the right!”

I couldn’t help feeling a little embarrassed. People have understood that we were on a quest this early in the morning only to eat Idlis!!!

Anyway, on the brighter side, at least now we could be sure that we were on the right track and that the idlis were indeed famous in this part of the world. When we turned to the right, we could see teasing smiles on the rustic faces of the womenfolk who were gathered around the Panchayat tap to collect water. Everyone has understood our motive!! It seemed obvious to them that a Karnataka registration car in their locality at that time of the day could only mean that the passengers have come lured by the magic of the idlies.

Questions started to gather in our minds. Have we become a mockery in front of these simple villagers? Is it better that we beat a retreat?

But NO…… How can we simply return like that? Let’s see how far things go… no matter what; we will eat the Ramasserry Idlies today!

We travelled another 1 km before we parked the car outside the wall of a temple on the left hand side. On the opposite side, we saw a local tea shop..it was a typical Kerala style Tea stall which we would tend to jestingly refer to as Bhagawati Vilasam Tea shop !

We entered the tea shop and placed an order for idlies. They informed us that it will take some time if we wanted to have fresh idlies. To make two idlies it would take half an hour.

While we were waiting for the idlies to arrive on the table, I made a casual entry into the kitchen. I could see that the cooking was in full swing on four or five special stoves made of stone. The idlies appeared differently shaped. They were flat like an ‘appam’ and larger in circumference than a normal idli.

On befriending the waiter, I gathered some more information regarding the famous Idlies. You also get to buy these idlies in some hotels and eating places located on the highway. But all of it is prepared and distributed only from this shop. This explains the hectic activities inside that small kitchen. The idlies were prepared throughout the day.

Naturally, a question may form in our minds. Will the idlies not spoil in the course of the day if all of it is not consumed? But the answer is an emphatic NO; these idlies will last up to one week without any change in taste and without getting spoilt.

I was then reminded of what I had read earlier in the newspapers. A prestigious hotel group had once attempted to recreate the magic of the ramassery idlies at their modern hotel and thus earn some glory and money. They hired a lady who worked as a cook in the Ramassery tea shop and tried to prepare the idlies in their five star kitchen. But their efforts went waste. It was a moment of realization that Ramassery Idli’s cannot be prepared on a gas stove and in high end steel utensils.

We relished the idlies which were distinct in their form and taste. On an experimental basis, we also bought a special chutney powder along with some packed Idlies to take along. We took them to Bangalore and consumed the Idlies within three days. We can vouch that the idlies did not lose their freshness or taste. Somehow we were hesitant to stretch the idlies beyond that.

On our way to join back onto the highway, we could still feel sneering glances of the villagers which were targeted at the gluttonous idli-eaters. But we did not feel any shame or embarrassment this time.

Instead we felt a sense of accomplishment as though we had succeeded in achieving something great in life.
———————————————————–
Translated from my Malayalam blog ‘ Chila Yaathrakal ‘ by Geetham. To read the Malayalam version, click here.