Trekking! I always wanted to trek. For some reason or other, it never happened. Of late, after reading some trekking experiences, I got sufficiently motivated and decided it’s high time I start trekking.

Soon, I was checking out the various trekking options in Kerala, and zeroed in on Chembra Peak, the highest peak in Wayanad district, for my first trek. On hearing my plans, my friend Tanzir offered to join. He was welcomed wholeheartedly. What fun is in trekking alone?

I figured out the routes and doors to knock (to get required permissions) from another friend Hari, from Mananthawadi, Wayanad. With all the necessary things stuffed into a backpack, we began the first leg of our trip in a car from Erumatheruvu in Mananthawadi.

We reached Meppadi, about 12 km from Kalpatta, the headquarter of Wayanad. We had been advised to take permission from the forest office at Meppadi. However, on reaching there, we were asked to go to Chembra estate. Before setting off to Fathima Farm, or Chembra estate, we bought packed lunch and water for two people from the Paris hotel at Meppadi, which is famous for its biriyani. By about 10 am, we reached Chembra estate, managed by the PVS Group and owned by Abdul Wahab MP. 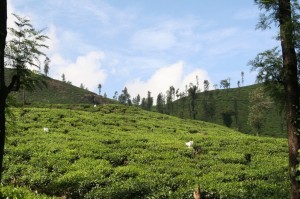 When we told our intention was to conquer Chembra Peak, watchman at the Farm’s entrance happily opened the gates for us. From there, it was a rough ride through narrow, zigzagging road amid tea plantations. A kilometer ahead, our vehicle was stopped at the office of the Forest Conservation Committee. One needs to take tickets from this office to go to Chembra Peak. After buying the necessary tickets, we traversed another 5 km of meandering pathway interspersed with five hairpin bends, and reached the office of the Estate’s managing director. A group of young trekkers from Karnataka was there, getting ready for the trek. They were carrying tents and sleeping bags. 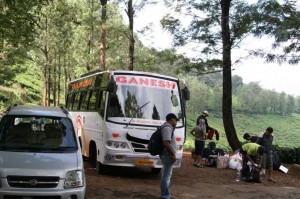 We parked our car, picked up the backpack and camera, and set out to capture the Chembra Peak. About 300 m ahead is the forest department’s watch tower. From the watch tower, we enjoyed the view below – lush greenery of rows and rows of tea plantations and the forest. Further down, were the quarters of the estate labourers.

There were two men at the tower, who work as guides and watchmen with the forest department. The middle-aged one, Ramettan, joined us as guide. The trek actually started from there, along the wild path next to the watch tower. We slowly followed the thin, barefooted Ramettan – I, carrying camera and tripod, and Tanzir, carrying the backpack stuffed with food and water.

The first 200 m of walk surrounded by wild trees went on fine. Soon, I started panting. I held my breath for a moment to check if Tanzir was also in the same condition. To my relief, he was also panting reasonably. I remember taking break three times, after which I lost count. While our rests became more frequent, Ramettan retained his cool. Even after listening intently, I couldn’t hear even the sound of regular breathing from him. Throughout the trek, the difference between the strong, hard-working old generation and the lazy, pampered new generation was quite evident. 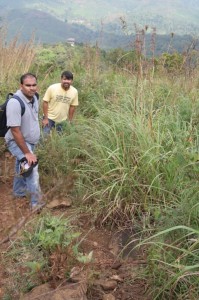 The climb was getting steep. Only when we spotted the watch tower way below, we got an idea about the distance we covered. After a while, the wooded pathway gave way to a trail along the slope of a hill. The path was covered with grass and bushes and had narrow hairpin bends. It was just wide enough for a person to walk.

Tall grass on both sides. Rounded rocks at some places. Sticky, slippery mud at others. One misstep was enough to skid and fall. Maybe, the soil was damp because it had rained two days back. Usually, trekking is not allowed when it rains heavily. However, as per Ramettan, this rule is not actively implemented in the case of foreigners.

After half an hour, we reached a plateau. There were a small tree and a lake with very little water. The watch tower was not visible anymore. Instead, in the distant valley, we saw the Kalpatta town and its buildings, looking like matchboxes. 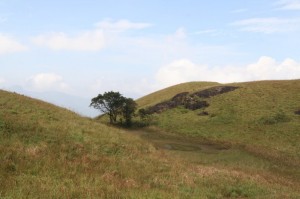 We were panting and scrambling up. Many a time, Ramettan had to wait for us. I am sure he thought that we were ‘panting’ examples for someone who had not done any physical work in their lifetime decided to trek one day.

By this time, we had finished our stock of water. Ramettan re-filled our bottles with cool water from a stream on the hillside. We quenched our thirst with this original mineral water. Packaged water would’ve hid its face in shame.

The view from the top was getting more and more beautiful. 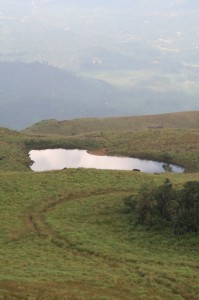 In another half an hour, we reached a comparatively flatter area. The beauty of the place was enough to forget the tough climb we endured to reach there. A magnificent lake lay placid on the hill, like a mirror for the clouds. It didn’t look deep, but Ramettan said the mud at the bottom is about 12-ft deep. A little away from the lake, there is a clump of trees on a plane. Ramettan said it’s called ‘Kollikoodu’. 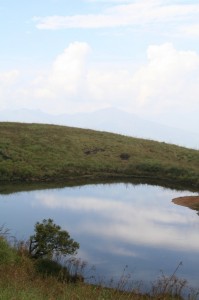 Washing face and hands in the clear water refreshed us. But, one hour of climbing had triggered hunger. We decided to have lunch before proceeding further. Tanzir divided the food among three of us. My hunger was abated after having two porottas and curry. 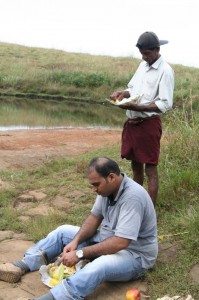 It’s another half an hour walk to the next peak. There’s another mountain beyond that. Chembra Peak is at a height of 6890 ft (2100 m) from sea level. We could see the young trekkers from Karnataka, climbing up along the slopes below. 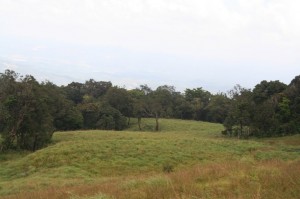 We resumed walking by clearing the grass on the way. The grass kept registering its protest against our intrusion into their free world by scratching our legs and hands. At times, the protest reached till our neck.

The climb further up was difficult. I gave the tripod to Ramettan to clamber up on all fours. Silver clouds were just above us. It looked like even if we didn’t climb up to touch them, they would come down and hug us. While climbing the last 100 m, I was scared to look down. Deep valley on each side. A narrow pathway. I almost hugged the path while climbing. One slip and I was sure that I’d be smashed. Though at first I suggested to stop the trek there, later I gathered enough courage to reach the top. How would I have justified it if I didn’t complete the trek to a place brimming with natural beauty and full of fresh air?

The lake below looked smaller. The seasoned trekkers from Karnataka had almost reached the plane near the lake. I wanted to sit there forever, enjoying from atop the views of neighbouring hills (Manimala and Idaykkal Mala) and the urban landscape of Wayanad. 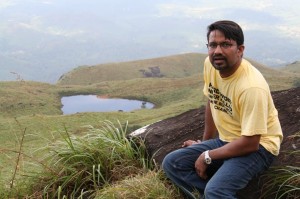 All of a sudden, it became cloudy. We could neither see the peak nor the lake. It was so dark that we could see each other only because we were sitting close together. The cloudy sky added to the already chilly November weather.

It was a rare moment for me – on top of the hill, relishing the caress of nature and drinking in its beauty. I felt very happy and proud as if I had conquered Mount Everest itself!

According to Ramettan, it will take an hour and a half more to conquer the last peak. One day is not enough for that. We needed more food and camping materials as it would take two days to complete the trek. We would’ve to camp at Kollikoodu on the first day and resume the trek on the second day. I decided to come back with a few adventurous friends to conquer Chembra Peak.

But, I had a doubt. A reasonable one, of course. I asked Ramettan, “Won’t there be any danger from snakes, etc, when camping overnight?”

He replied, “So far, I hadn’t found any venomous snake here”.

“Any other danger than the snakes?”

“There may be leopards”.

“Leopards?” My panting and even normal breathing stopped at once.

“You don’t have to worry. Leopards are dangerous only if cubs are there. Cubs may follow us like kittens. Mother leopard gets scared and may attack us to protect the cubs. They may also attack if we encounter them. But, they will not search for us and attack. Leopards are also scared of us,” assured Ramettan. His explanations showed his knowledge of the wild and the wildlife.

Apparently, there are no leopards in the Chembra hills. They come from the neighbouring hill Manimala. There was a newspaper report saying leopards had been sighted even at the back of the Collector’s bungalow at Kalpatta and that leopard traps had been set there. Last year, a leopard had entered the quarters of Chembra Estate and one person had a narrow escape with some scratches.

It was 2 pm. If we start climbing down now (and if we didn’t encounter any leopards), we would reach the base by around 4 pm.

I turned and looked at the Chembra Peak once more. Among the clouds, I spotted the peak, standing majestically like the crown of Wayanad – waiting to welcome adventurous travellers.
—————————————————————————————-
Translated from my Malayalam travel blog ‘Chila Yaathrakal’ by Mrs.Bindhu Unni (http://www.travelwithacouple.com/).